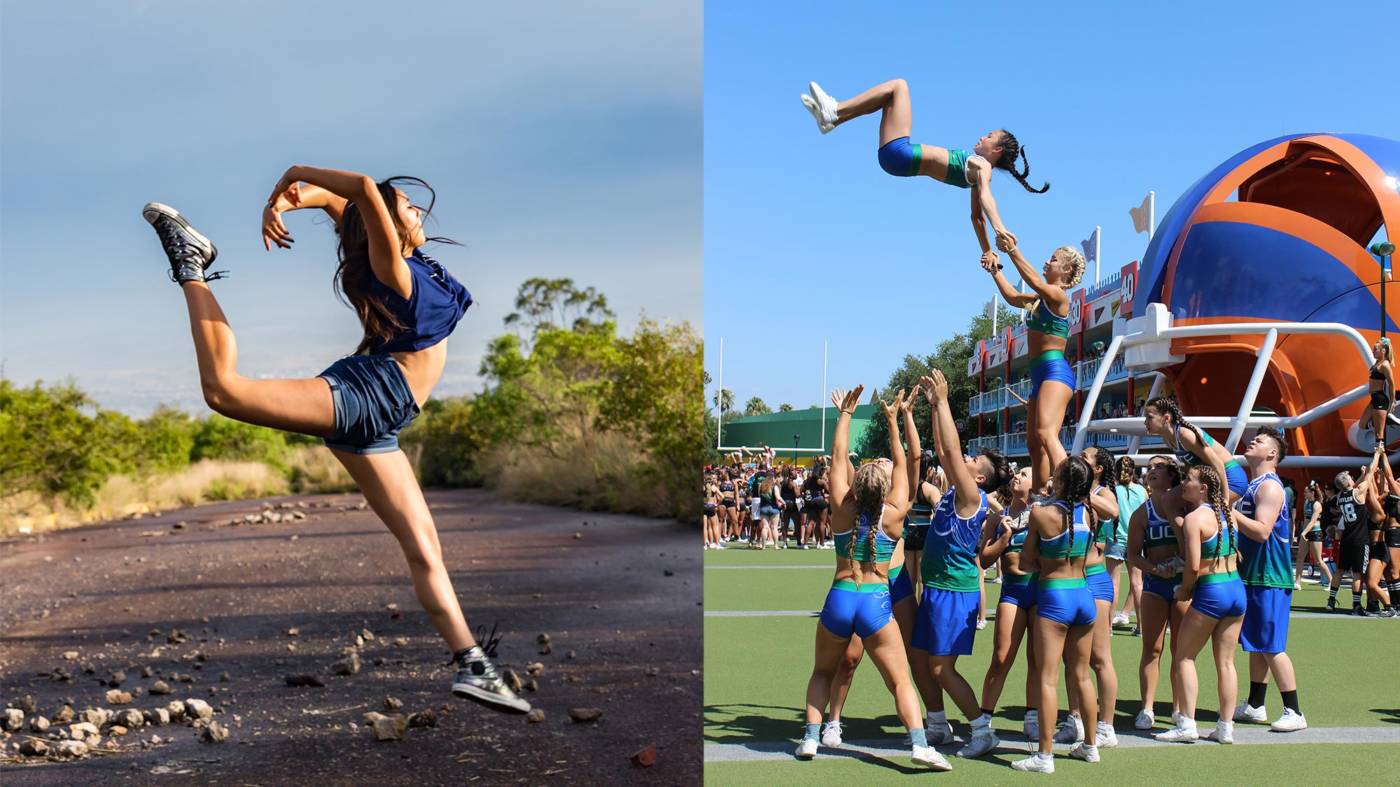 Both cheerleading and dancing are fun and energetic, and they are amazing for fitness. Children and teens can pursue either competitively and they can become a lifelong passion. But once you get into the arena of doing either to a serious level, it is almost impossible to find the time to do both. If you’re trying to make a choice for yourself, or you’re trying to make a choice for your child, you might well be struggling. We are going to take you through some of the differences between dancing and cheerleading, and hopefully help you to make up your mind.

Dancing and Cheerleading: The Similarities

Before we go on to talk about the differences, it is worth mentioning that there are some striking similarities between dancing and cheerleading. This can, of course, make it more difficult to make a decision between the two!

Both dancing and cheerleading require learning routines that have been choreographed, taught by a teacher or coach, and then implementing them perfectly.

Dancing and cheerleading are both performed either to music or to beats and in the case of cheerleading chants.

You can compete in both cheerleading and dancing, and this can involve traveling to all sorts of interesting places and, in the case of dancing, passing exams. Dancers can also become professionals and perform in shows.

Both dancing and cheerleading are focused on performing in front of a crowd. If you take part in either, you will get a chance to perform your routine in front of other people.

Dancing and cheerleading are both physically demanding and require a lot of dedication and training to be able to perform at a high level.

Dancing vs Cheerleading: The Differences

While there are quite a few similarities between dancing and cheerleading. So much so that at first glance they can almost seem indistinguishable. There are also some notable differences between the two that could be enough to sway you either way.

Dancing and cheerleading are both physical, this is true. But cheerleading is considered a sport and dancing is considered an art form. This isn’t just a case of meaningless terms being applied to them either. It does make a difference in practice as well. In cheerleading, for instance, the focus is on performing crisp moves that tick the boxes, such as completing a correct acrobatic trick. In dancing, however, the focus is on eliciting an emotion from the audience by performing the dance moves with the correct form and style.

It can also make a difference in how they make you feel when you perform. Because dancing is an art, it allows you to express yourself creatively and creative expression is an important part of the human experience. It is harder to get that from cheerleading simply because the focus is mainly on hitting the right moves at the right time.

Both dancing and cheerleading carry with them a risk of injury. You are performing big movements that require you to move your body quickly, and often to jump and leap. With some forms of dancing, especially ballet, there is also a risk of overstretching the connective tissue that surrounds the joints. Ankle and knee sprains are relatively common with dancing as well.

Cheerleading does by far, however, carry with it the higher risk of injury. Compared to many other sports, the risk of injury is relatively low. But the seriousness of the injuries that can occur do bear thinking about. Cheerleading injuries make up 50-66% of the catastrophic injuries that occur in female athletes. These are severe injuries to the brain or spine/spinal cord. And they usually occur because of tumbling or other stunts that have gone wrong. These injuries are still fairly unlikely to happen, but the consequences can be more severe than dance injuries.

Competitive careers for both dancers and cheerleaders are usually when they are young – children to teens or early twenties. The difference between the two, however, is that with dancing there is a possibility to extend your career much longer. You can dance until you are any age, and there are mature competitions available if that’s something you are interested in. If not, you can still perform as you mature, and adult dance studios will often put on shows. So you have a much greater chance at being able to dance to a high level and to take part in performances/competitions for a lot longer than with cheerleading, which generally stops at college age.

You can also have a better chance of moving onto an adjacent career in dancing than in cheerleading. After you retire as a teacher, you could go on to coach or teach cheerleading or you could be a judge at competitions. But there is a much wider range of careers available to you with dancing. So you could go into teaching or judging also, or you could go into costume design, stage management, dance therapy, and many more.

As we mentioned, cheerleading is only really accessible to the young and the very fit. While competitive or professional dancing can also have this limitation, there is much more to dancing than just competitive dance. People of any age, any fitness level, and those with mental or physical disabilities can all make dancing an important and enjoyable part of their life. So dancing is accessible to a much wider range of people, and for longer, than cheerleading.

Another area where dancing can be a more attractive option is its variety. There is really only one type of cheerleading, and that will be the type that you do for the entire time you are a cheerleader. Dancing, in contrast, has an incredible amount of variety in terms of the different styles you can learn, and many dancers will study a range of dance styles. These can include the more traditional dance styles like ballet, tap, or ballroom, and it can also include more modern dance styles such as contemporary, hip hop, or street dancing. One day, you could be perfecting a difficult and technical ballet routine but the next day you could be performing in an upbeat and exciting hip-hop show. All of the different dance styles have their merits, and having the chance to do any number of them you like is definitely a plus.

Let’s be honest here, both dancing and cheerleading are expensive hobbies, especially once they are taken past the hobby stage and into the professional/competitive stage. This is partly because of the fact that to become good enough to compete or perform professionally, you need to put in a lot of hours each week at the studio. Equipment costs, traveling costs, entrance fees, and more can also drive up the money that you need to spend. Competitive cheerleading can cost between $1500 and $7000 per year once everything is accounted for. Dancing can be even more expensive again if you get into the realms of attending a dance school or academy to be a professional dancer. One estimate is that the average cost of raising a professional ballerina for 15 years came out at $120,000, which works out at around $8000 a year.

Of course, as we’ve mentioned, dancing can be kept as purely a hobby, especially for adults. In that case, you won’t be spending anything like $8000 a year, and it’ll be much closer to the cost of an average fitness class.

Both cheerleading and dancing require high fitness levels, and taking part in either will absolutely get you fit (and help you to lose weight). The focus of each is slightly different, however. For cheerleading, you will be gaining a large amount of upper body strength because this is required for the acrobatics that you will be performing. For dancing, however, there is more of a focus on core strength, as well as leg/foot/ankle strength because these are required for footwork and for the extensions that you will be performing.

Learning cheerleading will leave you with amazing acrobatic skills whereas dancing will leave you with great balance, posture, flexibility, control, and coordination. Choosing between the two, in this case, is personal preference, although there is an argument to be made that the skills gained from dancing are more transferable to other parts of your life. The way you carry yourself will be more graceful and confident. Having good balance, flexibility, and coordination can help you when you take part in sports, or could even just stop you from tripping and falling.

Dancing and cheerleading are both brilliant fun and can be such a worthwhile skill to learn. Because of this, choosing between the two can be very difficult. On balance, dancing is probably the wisest choice for many people for a lot of the reasons we have listed here, but if your heart is set on learning to tumble or getting the chance to cheer on a sports team, then cheerleading can still be a great choice. Whichever one you decide on for yourself, or your child, it is bound to be a fun and worthwhile part of your life.